Here is the lineup of AGO meetings for this season, 2020-2021. Our meetings take place at various venues throughout the area and are typically the third Monday evening of the month although there are certainly exceptions. 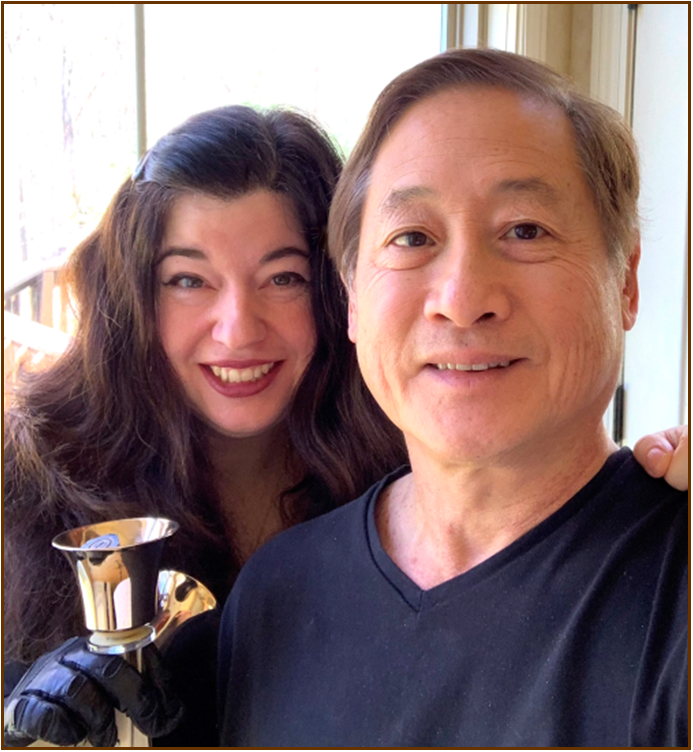 Out of Silence Music Rises 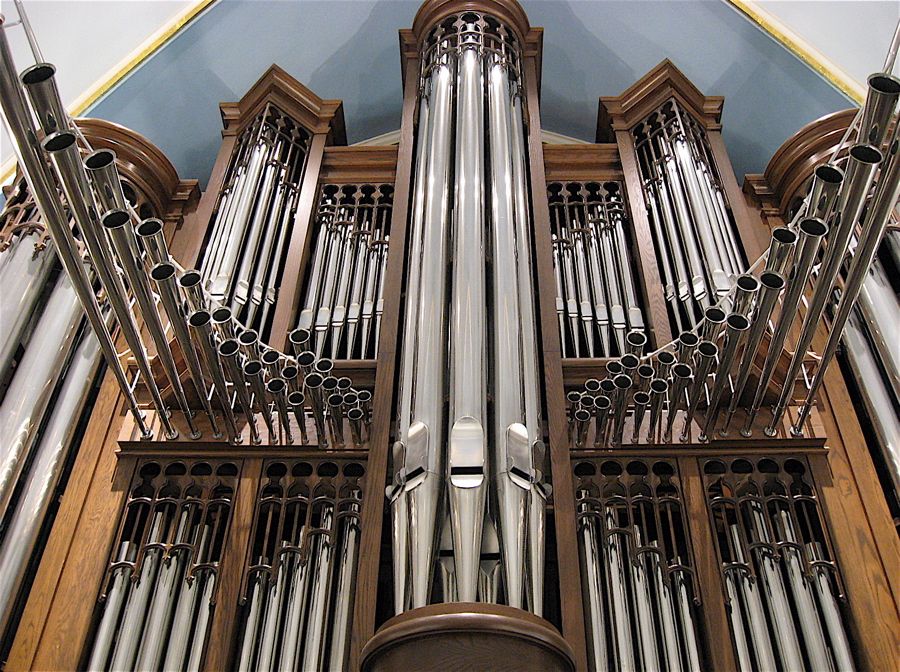 Year of the Young Organist: Investing in our Future

We will feature eight young organists in recital at the Cathedral of St. Andrew.  We have a great representation of ages, colleges and denominations with our performers: Chan Gyu Jang, Bethany Dame, Aaron Goodyke, Audrey Thomas, Jordan Malone, Ben Honeyford, Jonathan Bading and Andrew Chesebro.

In celebration of the American Guild of Organists’ Year of the Young Organist, eight young organists of the Grand Rapids AGO Chapter will perform in recital on October 18, 2021 at the Cathedral of Saint Andrew. The performers represent a diverse group of musicians studying and working in various denominations throughout West Michigan.

Jonathan Bading is the Director of Sacred Music at Sacred Heart of Jesus Parish in Grand Rapids, where he serves as organist and directs several parish choirs. He also founded and directs Gaudete Grand Rapids, a choral ensemble dedicated to performing the perennial music of the Roman Rite in the context for which it was written, the Traditional Latin Mass. Mr. Bading holds a B.Mus. in Organ Performance from Hope College, where he studied with Huw Lewis. He has studied Gregorian chant in France on two academic grants and received First Prize in the Annamae Rotman Young Organist Competition in 2018. Jonathan enjoys living with his family on the West Side, a stone’s throw away from their parish. 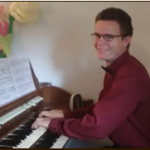 Andrew Chesebro, a student of Dr. Joan Ringerwole, has studied organ for two years, and enjoys playing Bach with his eyes closed. Homeschooled from his birth, he expects to graduate from high school this year. He hopes to study criminal justice and organ in college, possibly at Dordt University. Some of his other interests are trumpet, piano, percussion, and running.

Bethany Dame is a Junior at Hope College studying Organ Performance Major under the instruction of Dr. Huw Lewis. Some organ accolades include placing first in the MFMC and Rotman organ competitions in 2019, and playing at St. Patrick’s Cathedral in New York City. Her musical studies have also included twelve years of piano and nine years of percussion. In addition to organ, Bethany is pursuing a degree in Wave Sciences at Hope College, and has been selected to be a lab assistant for a virtual physics lab. Her hometown is Kentwood, Michigan. 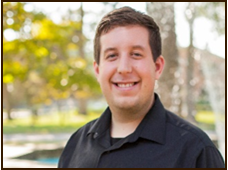 Aaron Goodyke grew up in the Zeeland/Holland area, graduating in 2016 Summa Cum Laude from Hope College, earning a Bachelor of Music in Vocal Education with an emphasis in organ studies with Dr. Huw Lewis. He regularly performs and collaborates with area musicians and ensembles at several venues throughout West Michigan, and is a member of the Holland and Grand Rapids Area AGO chapters and the Michigan School Vocal Music Association (MSVMA). He serves as the Middle School Choir Director at Caledonia Community Schools, 6-7-8-9 SSA State Honors Choir Coordinator for the MSVMA, and Secretary for the Caledonia Education Association. Aaron and his wife Kristin recently became Co-Directors of Music at Second Reformed Church in Zeeland, where they coordinate a vibrant music program and the Second Recital Series.

Chan Gyu Jang is the Director of Worship and Music at Seymour Christian Reformed Church and the Resource Development Specialist for Web-based Liturgical Resources at Calvin Institute of Christian Worship. He is a graduate of Calvin University (Music Theory and Psychology) and Calvin Theological Seminary (Master of Divinity). He recently earned a Certificate in Editing from the University of Chicago Graham School and is currently completing his Master of Theology program at Calvin Theological Seminary. Chan fell in love with the organ when he was a sophomore at Calvin University. His passion toward the instrument and its pastoral role in worship was inspired and guided by his teacher Norma deWaal Malefyt.

Jordan Malone is currently a student attending Aquinas College, studying Liturgical Music with his instrument being organ. He also serves as the Director of Music at Saints Peter and Paul Catholic Church, as well as the Student Pastoral Musician at Our Lady Seat of Wisdom chapel at Aquinas College. In his free time, you can find him working his third job at Circle Theatre as an Experience Associate. He also sings with the Grand Rapids Choir of Men and Boys. 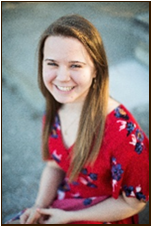 Audrey Thomas is the Director of Sacred Music at Our Lady of the Lake Catholic Church in Holland, Michigan. She holds a Master’s Degree in Sacred Music and Organ from the University of Notre Dame and a Bachelor’s Degree in Organ from the University of Kansas, where she studied with Dr. Craig Cramer and Dr. Michael Bauer, respectively. During her academic studies, Audrey worked with the Notre Dame Liturgical Choir, University of Kansas Bales Chorale, and the St. Lawrence Catholic Campus Center Choir. In 2018, Audrey won second place in the Fort Wayne National Organ Competition. She has participated in organ festivals and academic tours in the Netherlands and Germany. Audrey teaches courses on sacred music for the Lakeshore Academy for the New Evangelization (LANE) in Holland, Michigan. 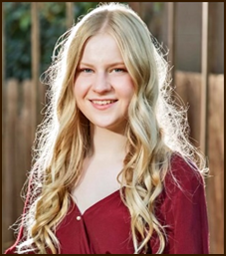 Katarina Woldt is studying biochemistry and public health on the premed track at Calvin University. On campus, she is a Sustainability Coordinator, plays euphonium in the Wind Ensemble, sings with the Knightengals acapella vocal ensemble, and is part of the leadership team for the pre-health club. She enjoys singing in choirs, rock climbing, hiking, and reading in her free time. She has studied piano for 13 years and organ for 1. She is grateful to be studying organ for another year, having received the Norine E. Potts scholarship at Calvin University and the Kathryn Loew scholarship from the Southwest Michigan chapter of the AGO. 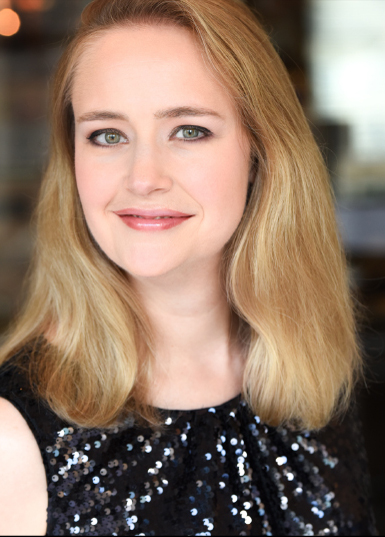 Hailed by The New York Times as “splendid” and “one of New York’s finest organists”, Renée Anne Louprette performs widely as organ recitalist, accompanist, and teacher. Based near New York City, she has performed with many of the city’s premiere ensembles, including the Mostly Mozart Orchestra and the New York Choral Society, and she has appeared in Carnegie, David Geffen Hall (formerly Avery Fisher Hall), Alice Tully, and Merkin Halls. Her recording of J. S. Bach’s ˆGreat Eighteen Chorales” (on the Axis label) was named Critics’ Choice 2014 by The New York Times.  In February 2018, Acis released her new CD, One Voix Française: A French Voice.  She frequently collaborates with Irish pipes Ivan Goff and the American Brass Quintet. Ms. Louprette is University Organist and Coordinator of the Organ Department at Mason Gross School of the Arts, Rutgers University. 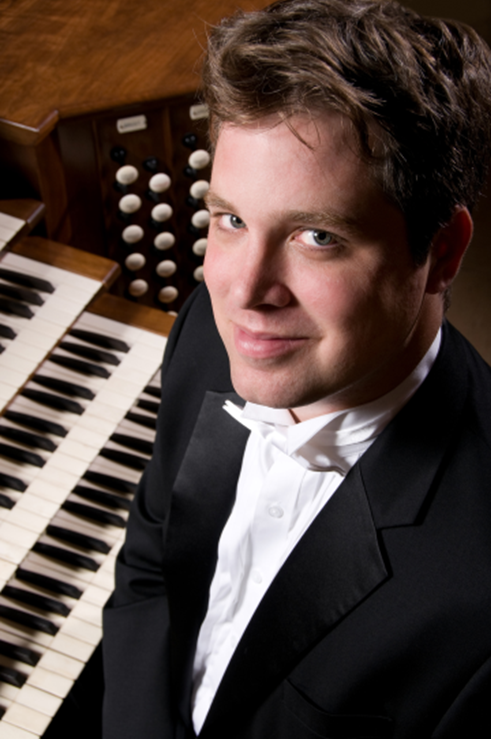 Gregory Hand is associate professor of organ at the University of Iowa. Prior to this appointment he held the position of University Chapel Organist at Northwestern University, where he also taught in the Music Theory department. He was awarded the Doctorate of Musical Arts degree from the University of Michigan, where he studied organ with James Kibbie and harpsichord with Edward Parmentier.

Dr. Hand is in high demand as a performer and pedagogue. He was recently appointed to a five-year term on the jury of the Internationale Orgelwoche Nürnberg (ION), and has given recitals and masterclasses in the United States, France, Spain, Germany and Brazil.

His debut CD, “The Complete Gospel Preludes of William Bolcom” on the Naxos label marked the world premiere recording of all twelve of these landmark pieces.  Critics praised the recording as “stunning” (American Record Guide) and noted the “sonorous and probing performances” (Gramophone), and the “brilliance of his technique” (allmusic.com). 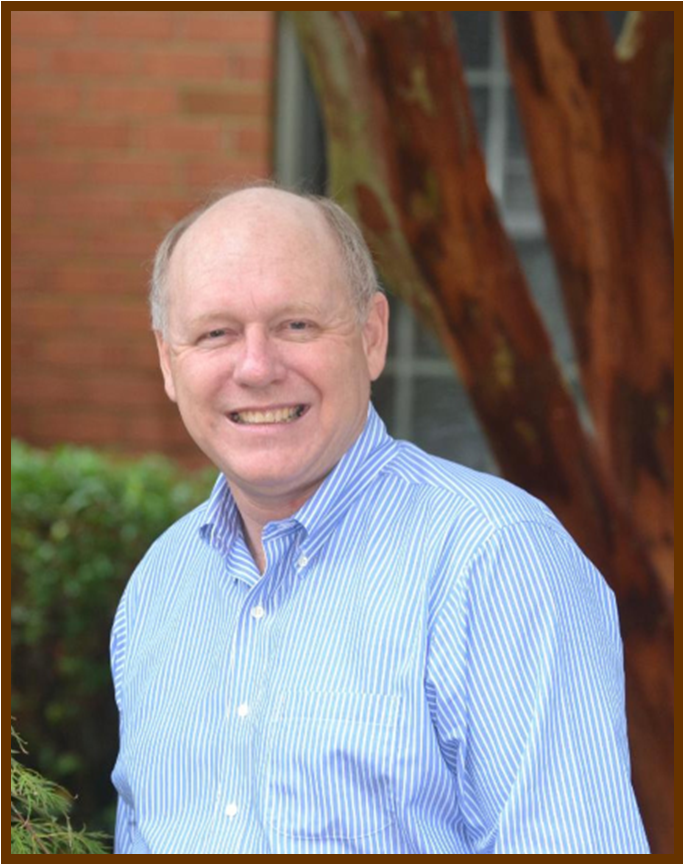 Born in England, composer/organist John S. Dixon has lived in Virginia for thirty years. Since 1990 he has written more than 800 pieces, mostly for organ, but also for choirs and instrumental ensembles.  He is the organist at Providence Presbyterian Church in Virginia Beach, and serves as the executive director of the Academy of Music, a community music school based in Norfolk.  Currently he holds the office of Treasurer/Councilor for Finance and Development of the American Guild of Organists.  John will play a program of his own compositions, including arrangements of familiar melodies, and explain why and how the pieces were composed.  After the concert he will have complimentary pieces available for organists to take home. 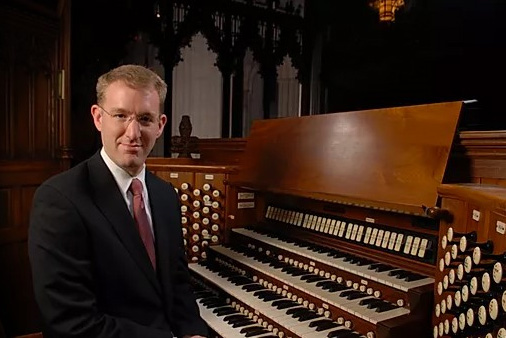 Scott Dettra performs the complete organ works of César Franck in two recitals at LaGrave Avenue Christian Reformed Church.  Thanks to his mature harmonic language and ability to write achingly beautiful melodies, Franck’s music has become an enduring foundation of the organ repertoire.  Praised for the clarity, rhythmic intensity and musical elegance of his playing, Mr. Dettra will bring his hallmark poeticism and suave sense of expression to this beloved music, which is rarely performed live in its entirety.

Praised as a “brilliant organist” (Dallas Morning News), an “outstanding musician” (The Diapason), and described as a “prodigy” by The New York Times at age 13, Scott Dettra is acclaimed as one of America’s leading concert organists. Mr. Dettra’s playing is praised for its clarity, rhythmic intensity, and musical elegance, and has been described by The American Organist as “music making of absolute authority and sophisticated expression.” He combines an active performance schedule with his post as Director of Music at the Church of the Incarnation in Dallas, where he leads a vibrant music ministry in one the country’s largest Episcopal parishes. In addition to his work at Incarnation, he is a member of the organ faculty at Southern Methodist University, and is organist of The Crossing, the Grammy-winning professional chamber choir based in Philadelphia. Prior to his appointment in Dallas, he was Organist of Washington National Cathedral.

Recent and upcoming performances include appearances in New York, Los Angeles, Chicago, Boston, Washington, Atlanta, Houston, San Diego, Phoenix, Kansas City, Barbados, Canada, and Germany. Festival appearances include the Lincoln Center Festival, the Carmel Bach Festival, the Arizona Bach Festival, the Bermuda Festival of the Performing Arts, and the Piccolo Spoleto Festival. He has been a featured performer at national conventions of the American Guild of Organists, the Association of Anglican Musicians, the Organ Historical Society, and the Association of Lutheran Church Musicians, and is in demand as a clinician and adjudicator for master classes, workshops, and competitions.

Mr. Dettra is featured on many compact disc recordings, including The Anglo-American Classic Organ (Gothic), Majestus (Loft), recorded at Washington National Cathedral, and Tongues of Fire (Pro Organo), recorded on the 325-rank instrument at West Point’s Cadet Chapel. Additional recordings may be found on the Gothic, Innova, Lyrichord, Pro Organo, and Linn labels. In addition to commercial recordings, his performances have been broadcast numerous times on such radio programs as American Public Media’s Pipedreams and Performance Today, the BBC’s Choral Evensong, and The New York Philharmonic This Week.​

An accomplished choral conductor, Mr. Dettra’s choirs have been featured on national radio broadcasts in the United States and the United Kingdom, and at conventions of the American Guild of Organists and the Organ Historical Society.  He has prepared choirs for performances with such ensembles as the National Symphony Orchestra, the Juilliard Orchestra, and the Dave Brubeck Quartet, and has also led and taught several courses for the Royal School of Church Music.

A native of Wilmington, Delaware, Mr. Dettra began piano study at age 3 and organ study at age 8 as a student of his father, Lee Dettra, holding his first church organist position at the age of 9. He made his New York debut at Riverside Church at the age of 11. Mr. Dettra holds two degrees from Westminster Choir College in Princeton, where he was a student of Joan Lippincott, and has also studied organ and jazz piano at Manhattan School of Music.

In addition to Washington National Cathedral, he has previously held positions at the Washington Bach Consort, the Cathedral Choral Society, the American Boychoir School, and church positions at St. Paul’s, K Street in Washington; St. Mark’s, Locust Street in Philadelphia; and Trinity Church, Princeton. He and his wife Haley reside in Dallas with their daughter.